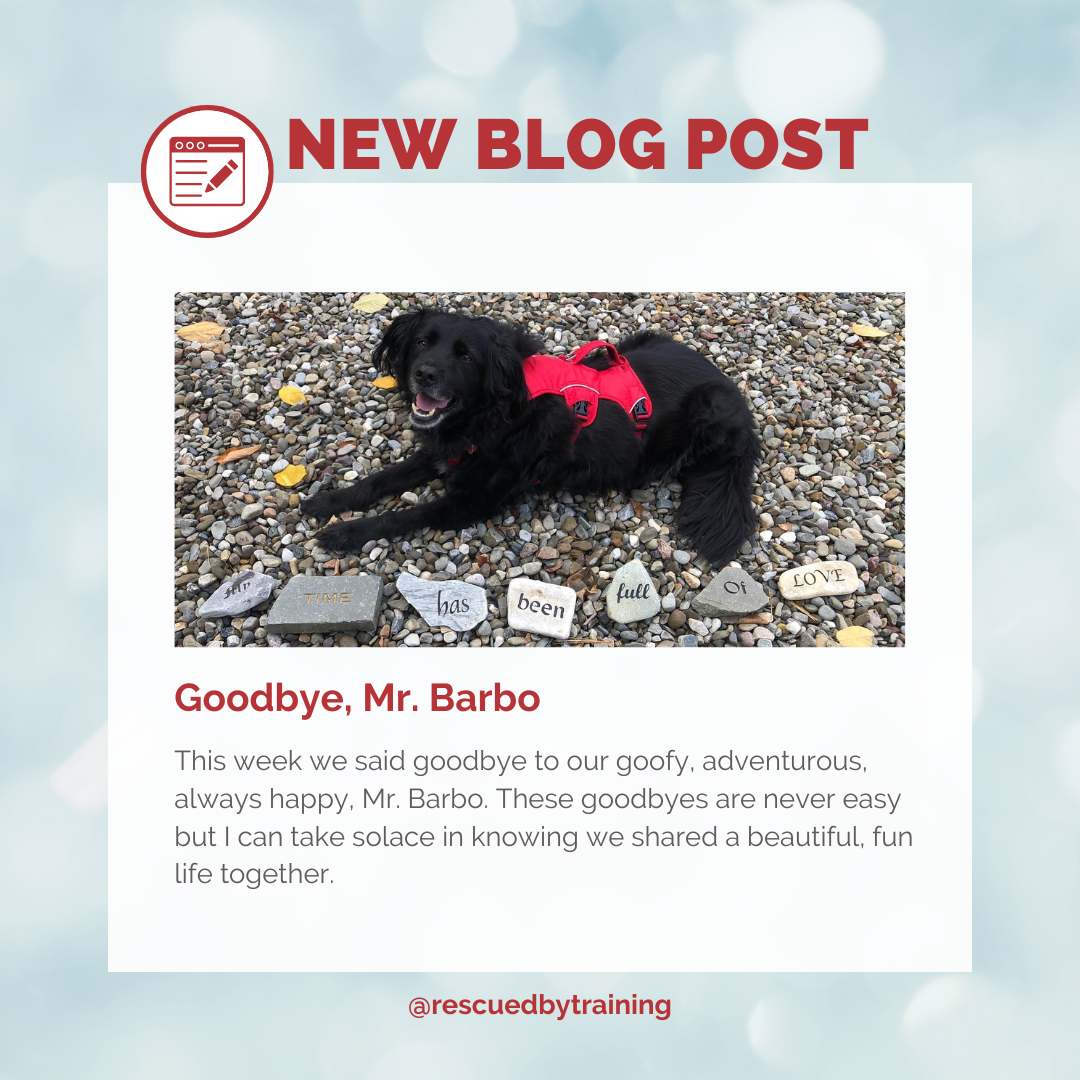 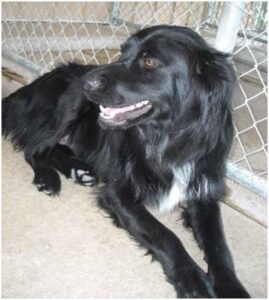 This week we said goodbye to our goofy, adventurous, always happy, Mr. Barbo. These goodbyes are never easy but I can take solace in knowing we shared a beautiful, fun life together, filled with over a decade of adventures, snacks, travel in 18 states (via car, train, and ferries), 4 houses in 3 states, over 50 foster dogs, meeting Ozzy Osbourne, and countless parks, hikes, beaches, trails, swims, and time spent snuggling, training and for him, rolling upside down in the grass while I cooed over how cute and happy he was.

If you’ll indulge me, I’d like to share his story. Mr. Barbo, originally Sloppy Joe, came from a rural shelter in Danville IL, (this was his shelter picture) where he had been returned twice, once as a puppy and then as an adolescent. He caught the eye of a pilot named Brent on a border collie rescue page and coincidentally, Brent’s family lived in the area of the shelter. Brent, a volunteer transport pilot, had flown rescue transports and decided to help save this young dog. He coordinated and paid for the flights to get Sloppy Joe from Illinois to New Jersey, where Eleventh Hour Rescue had agreed to take him in. Brent was truly Barbo’s guardian angel. Without him, Barbo wouldn’t have made it out of the shelter.

Sloppy Joe was on his way. One of his flights was flown by pilot Lynn, and this was her first Pilots n Paws mission, so that got some local news coverage. (We didn’t know it at the time.)

He made his way across half of the country to us, living in NJ at the time. We met him at an adoption event and after careful consideration, we decided to take the one “who didn’t bark.” Boy, was that a bait and switch!

We adopted him on October 24, 2009, 7 months after our previous dog, Bandit passed away from a sudden seizure. During our “time off” between dogs, we took a trip to Manchester VT and on a hike at Mount Equinox, we came across the grave of a dog who had lived on the property many decades ago, who had been shot and killed by a cowardly hunter. The story was so moving to us that we decided when we adopted Sloppy Joe, we decided to name him Mr. Barbo, in honor of the original one.

Years later for our wedding we’d return to Manchester and our Mr. Barbo had his picture with his namesake’s grave marker. Speaking of our wedding, it was a small affair and he helped make that day extra special for us.

I was not a trainer at the time we adopted Barbo but he was the exact dog we needed after living with an aggressive dog for 12 years. Barbo was prosocial, playful, a little mischievous and always up for adventure but also perfectly willing to hang out at home. We could, and did, take him with us to friends’ houses and family gatherings and in his youth, he enjoyed the dog park. But his real love was hiking and lure coursing. We joked he was part border collie, part mountain goat, because he would scale rocks on our hikes and was pretty fearless. 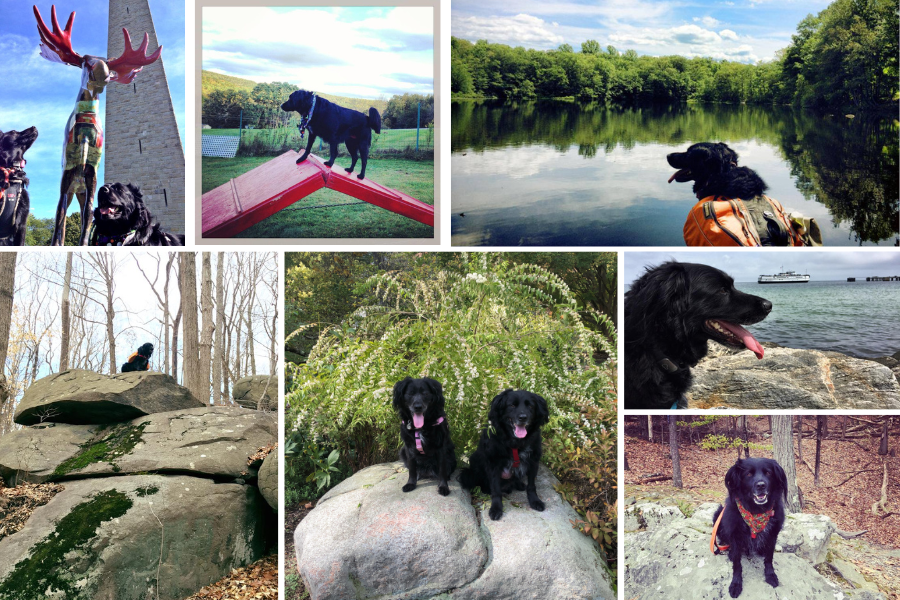 We discovered a lure coursing club and for years we regularly went almost every Saturday morning during season. And when we got Boo, she loved it too. They were a great pair, outpacing each other, cutting corners and eventually learning to bite the line to “catch the bunny.”

He was always a curious, brave, enthusiastic dog, eager to greet people and dogs, socialize and play, especially smaller dogs and puppies. He had beautiful self-handicapping and would crouch down and army crawl to meet small dogs. This skill was surprising because he was a singleton puppy – not raised with littermates, so his play skills in many situations were a little deficient. He wasn’t a bully but never really got the hang of reading dog body language, especially when other dogs didn’t want to play. But with the right play partner, his play skills were beautiful.

His lack of body language skills made us nervous about bringing another dog into our home. How would he respond? Would he like a companion? We decided to foster to adopt BooBoo but it was love at first sight. They immediately hit it off and were buddies for life. BooBoo the perfect companion for him – dog social, rarely escalates and just tolerated his rough play and bad communication. In fact sometimes she’d play hard to get and would look like she wasn’t enjoying his play and then would paw him in the face “do it again, do it again!”

And they loved each other so much. They didn’t snuggle a lot after the first year or two, except in the car but they’d seek each other out, especially when we left them alone and were often found touching each other or posing closely for photo ops. They shared even the highest value treats, chews and pans to lick. They were the best of buds. 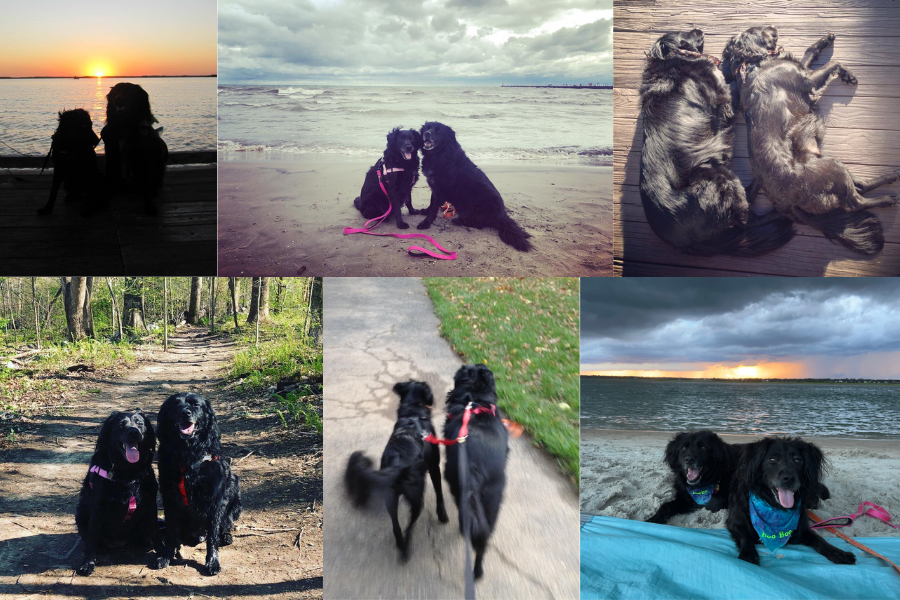 He was one of the most well traveled and social dogs I’ve known. He was never boarded, always came on vacation with us and often ran errands or came out to eat with us when outdoor dining was an option. He made many, many friends over the years and was incredibly well loved. 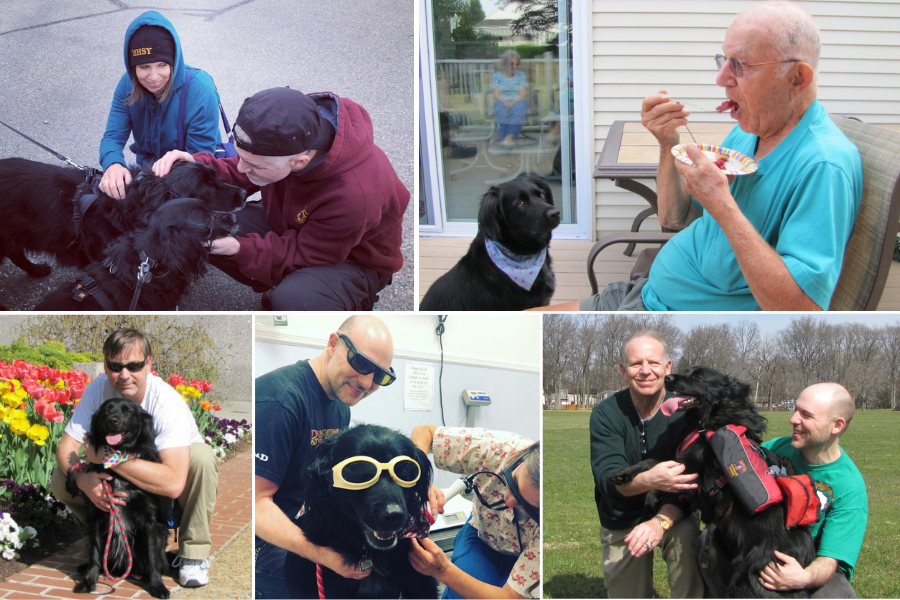 On one of our travels to Martha’s Vineyard we stumbled upon Barbo’s Wayside Furniture outside the ferry area and we befriended the owner, Steve Barbo, shared our story with him and would stay in touch over the years.

But the last year was hard. His previously managed arthritis started to still be bothersome and painful, even on meds. He landed in the ER with pancreatitis. And a month later, a previous benign fatty lump began to grow, almost 1cm per day. The surgeon removed what turned out to be a cancerous mass. And while he rebounded from that initially, things continued to slowly decline over the last few months. 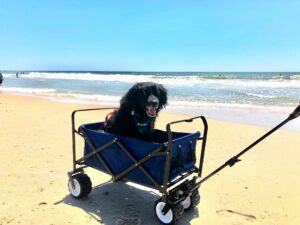 He didn’t have the stamina for long walks, so we got him an adventure cart. We 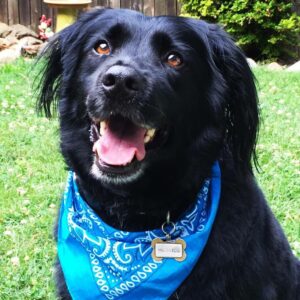 increased his pain meds and made further adjustments. But then in the beginning of July, what began as storm phobia started to generalize to more afternoon and evening anxiety. He’d pace and pant, on some days pacing over 3.5 miles. We medicated more but suspected increasing chronic pain, especially with the increased activity from the anxiety. So we added in more pain meds but it was affecting his quality of life. For a dog who loved to be out and about to be sedated and sleeping all day was not a good quality of life. Additional testing revealed he had a pituitary brain tumor that was causing him to be stressed (by sending signals to the adrenal glands to release cortisol all the time). It was also causing muscle wasting, which is why his mobility declined and was needing help getting around. And it would put him at risk for having a seizure, among other things.

So in honoring my promise to never let my dogs suffer, we made the decision to say goodbye. We had a beautiful last couple of days. He got all the junk food he wanted, visited some favorite spots and was showered with love by everyone. We wanted to be sure to send him off with dignity and in a positive way. He was euthanized at home, surrounded by those he loved, outside, where he loved to be.

Through my tears, I will try to remember his goofy smile for all eternity. I’m really going to miss my buddy. but know we helped give each other a better life. And as the rocks in this picture (before his surgery last year) say “My Time Has Been Full Of Love”  It sure has been and I will love you forever. 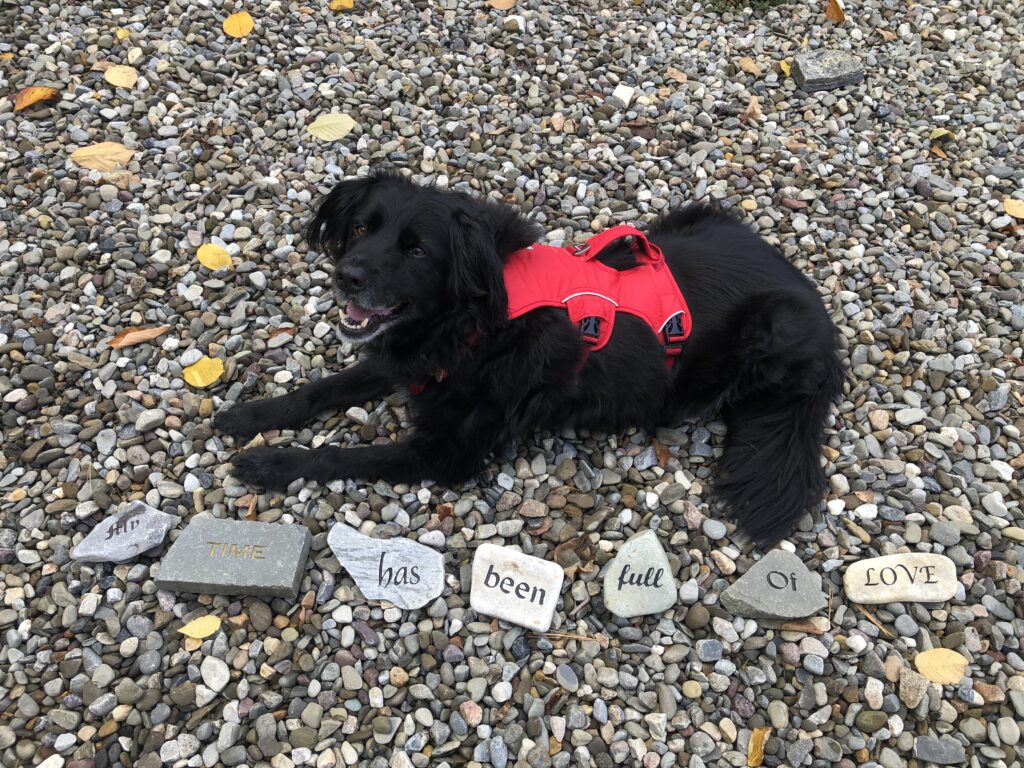 I will be taking some time off to mourn. Current SA clients will be contacted. Losing a loved one is hard enough but when you’re a dog professional it’s extra painful to have to try to work with other dogs during a time like this. I’ll be back in a week or two so if you need help with your dog, please be patient with me. I’d love to help you but need some time right now.  You can schedule a session here. 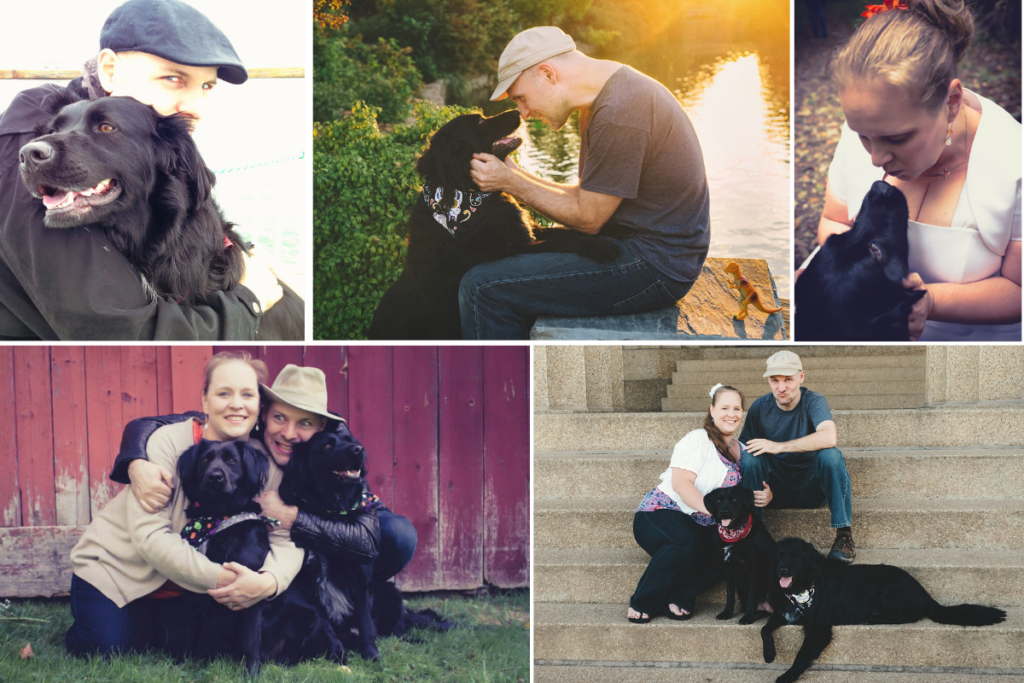 In the meantime, here’s a wrap up of recent posts I’ve made about senior dogs and a tribute video, with music composed by my husband.

Living With And Loving Senior Dogs

Quality of LIfe And Grief Resources

Living With And Protecting Senior Dogs

Give your pups some extra treats from me and Mr. Barbo, for free…don’t make them work for it.

← Prev: Caregiver Burnout And Dogs Next: Will Getting A Second Dog Help? → 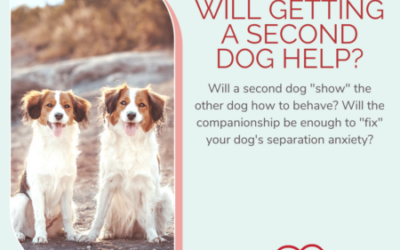 Will Getting A Second Dog Help?

Often when I'm talking with clients, I can sense their frustration about their dog's behavior issues. Living... 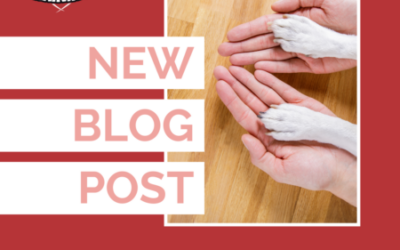 When you share your life with a dog struggling with fear, separation anxiety or are caring for a sick or senior... 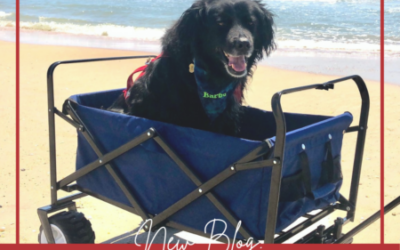 Living With And Protecting Senior Dogs

As I've written in the past, I currently share my life with two senior dogs. Mr. Barbo, who will be 14 in just...