Fear in Dogs: Lack of Socialization 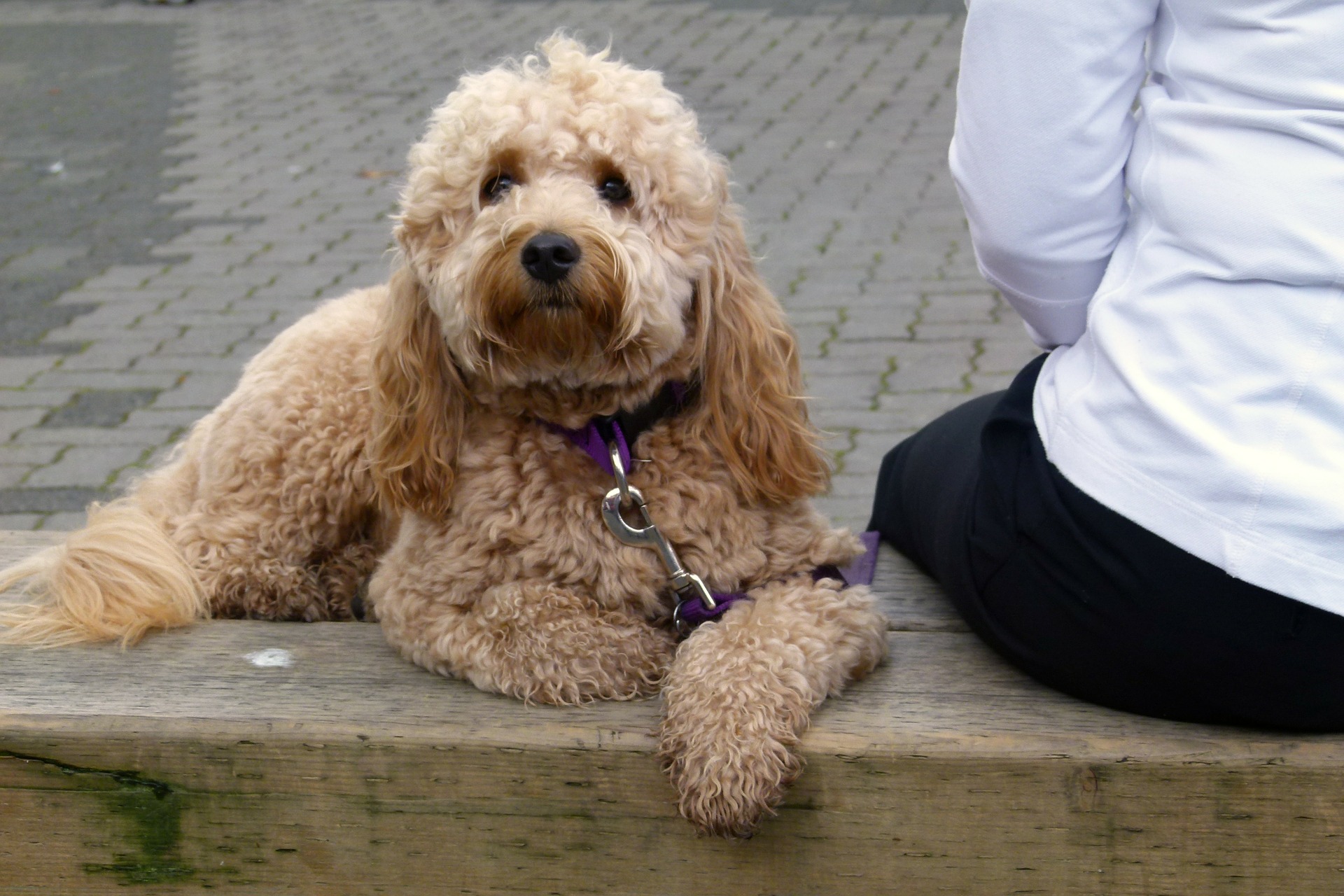 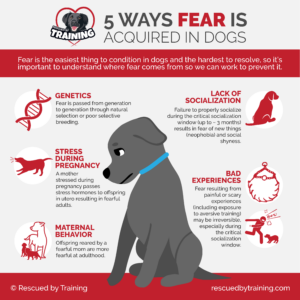 This is the fourth and final installment in my Fear in Dogs series discussing all the various ways dogs can acquire fear. Last week I released this helpful, downloadable infographic that you can download on my Free Downloads page.  This week, I’m discussing lack of socialization and its role in fear.

As I mentioned last week, many people erroneously assume that any fearful dog must have been abused or had bad experiences.  While this does account for some fear in dogs, the overwhelming reason I see in my behavior practice for fearful dogs is lack of socialization or lack of PROPER socialization during the critical socialization window, of up to about 3 months.  I discuss socialization and that yes, you can and SHOULD take your puppy out to socialize, even before all of their vaccines are completed in this blog post.

What is proper socialization?  (And debunking some myths.)

Socialization Myth #1: To socialize a dog, just put the dog into lots of new situations.

Socialization is not just exposure to lots of different things like people, places, sounds, dogs, other animals, body handling, unusual looking things, textures, and more but it is creating intentional positive experiences, so we can control the environment as much as possible and ensure that the puppy have a positive experience and actually enjoy the thing you’re socializing the dog to.  There is a big difference between tolerating something and actually enjoying it.  Just putting your dog into situations isn’t socialization.

Proper socialization ensures the dog feels safe at all times, is never forced or tested to see if they can “deal with it” and is always given the chance to say no and leave.  We also must pair socialization with high value food (or play or something the dog really enjoys) to help create positive associations (read about how dogs learn in this handout).  When we orchestrate safe, predicable interactions and pair them with steak or high value food, we help the puppy learn this new thing is awesome!

Socialization Myth #2: Your dog just needs to have a single exposure to be socialized

Socialization Myth #3: Expose the dog to things he’s afraid of and he will just “get used to it”

Forcing a puppy to have interactions they’re not actually comfortable with (like having strangers pass the puppy around, if the puppy isn’t really enjoying those interactions) could backfire and cause the puppy to become afraid of being touched or of strangers.  How do you know if the dog is enjoying it?  First we look at body language (download a handout on dog communication here) and we observe and see if the dog is choosing to engage (is the dog approaching the person for petting or is the person approaching the dog?).  And if the puppy growls or backs away, stops eating our steak or tries to hide, that puppy is not enjoying that interaction and is asking for more space, so help them.  Read here about what to do if your dog growls.

When dogs are not properly socialized in their socialization window, they can grow up to be fearful dogs.  Fear is how animals instinctively avoid injury, disease and even death.  If you’re not certain what something is, it’s better to be afraid of it.  If you make the wrong choice, it could kill you or injure you. If we don’t socialize puppies to strangers, and we keep them holed up in our home and that dog hasn’t learned that strangers are safe, and may growl, bark or lunge at unfamiliar people or people who look differently than what the dog has been exposed to when they do meet new people.  If we don’t socialize puppies to a variety of dogs (sizes, breeds, ages), that puppy could only be comfortable around a certain type of dog.  During socialization we need to help teach dogs that novelty is safe so when they grow older, they’re resilient and even things they may not have been exposed to before, are safe, because they learned that novelty was safe.

Let me briefly touch on the idea of dogs “getting used to” something.  This comes up a lot with clients as they explain that they put their dog into a situation or did something to their dog to help them “get used to it.”  This idea, called habituation in psychology, means when someone is exposed to something repeatedly, they have a decreased emotional response to it.  But this doesn’t work with experiences or things that you’re afraid of.  This approach only works on neutral stimuli. For example, if you got a new grandfather clock and it chimed every 15 minutes, initially you would notice it.  But, it’s not scary or painful, so eventually you will habituate and not even notice the chimes.  This is very different than flooding, which is covered next.

Socialization Myth #4: If you flood the dog with the things he’s afraid of, he will have no choice but to “deal with it”

Repeated or constant exposure to something you’re afraid of is called flooding.  If your dog is afraid of having his feet handled, you constantly touching his feet won’t help him “get used to it” or force him to “deal with it” or make him less worried, but it could actually make him worse!  To help him, we’d have to do a gradual desensitization plan and teach him that foot handling is good.

If during socialization, the dog is flooded, or overwhelmed with the thing they’re afraid of (most likely also causing a bad experience), this could have a permanent impact.  Flooding a dog doesn’t help and can cause sensitization where repeated exposure to stimuli causes a progressive, increased response. This makes your dog’s fear worse, not better.  This is common in separation anxiety dogs.  People think their dog just needs to learn to be alone but the repeated exposure to alone time in a dog who is terrified of being alone, makes the fear worse.

There are awful videos of dogs being flooded by fireworks, where they’re staked in a field and fireworks are shot off all around them.  They’re terrified and eventually they shut down and appear to stop panicking, but this doesn’t mean they are now comfortable with fireworks.  This is learned helplessness –  they learned they can’t do anything about to avoid this situation and have given up and shut down for preservation.  This sadly often happens at the vet also.

If you were afraid of spiders and I locked you in a room full of spiders, that wouldn’t help you get over your fear of spiders and it very well might make you more afraid of them AND afraid of me for forcing you into that situation.  We don’t want to do that with strangers or sounds or place or anything our puppies might be afraid of.  If your puppy is afraid of small children, having lots of small children circle around your puppy and try to pet him isn’t going to help.  Instead, let’s help them feel safe and foster a loving, trusting relationship that teaches them they can rely on you to keep them safe.

“Heavy socialization is the single smartest investment you can make in a dog.” (Jean Donaldson, The Culture Clash: A Revolutionary: New Way to Understanding the Relationship Between Humans and Domestic Dogs)

If you have a new puppy or are getting one or if you have a fearful dog, I encourage you to get started training soon.  For new puppies I offer a socialization consult, where we will go over my puppy socialization checklist and lots of other puppy relevant topics.  For fearful dogs, a fear and aggression consult will give you the information, tools and resources for helping your dog feel safer and learn how we train fearful dogs. Reach out for help and your consult today! 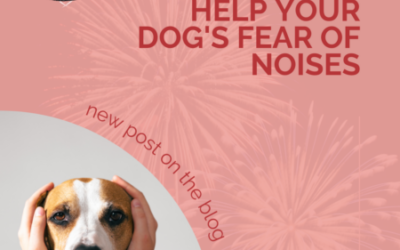 9 Ways To Help Your Dog’s Fear of Noises

Living with a dog who is noise phobic is hard, on the dog and on the people. It's difficult to watch a dog... 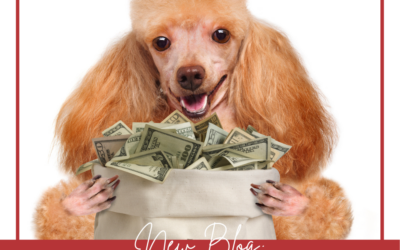 Why Training Is So Expensive…Or Is It?

If you think it's expensive to hire a professional to do the job, wait until you hire an amateur - Red Adair I... 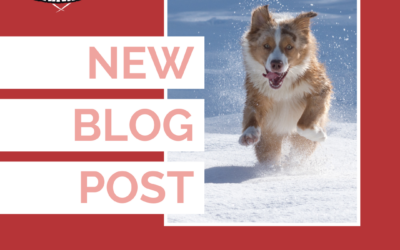 Behavior Is Not A Slippery Slope

As I recently discussed, behavior is never random.  And it's also not a slippery slope. Dog-dog issues don't predict...