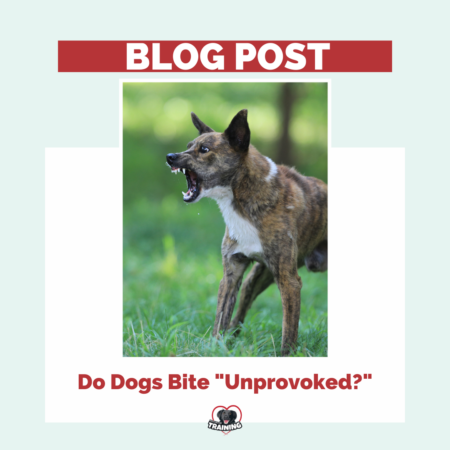 Behavior is never random.  Often clients will come to me saying their dog has bitten “unprovoked” or “out of the blue.” Bites happen fast, so it can seem like they happen out of the blue but when we dig into it, we uncover that the dog was fearful in a situation and biting was the only way the dog saw as a way to get relief. Ultimately this comes down to dog communication and body language and the person does not recognizing the dog was fearful or stressed or not understanding the warnings signs that the dog was giving off. 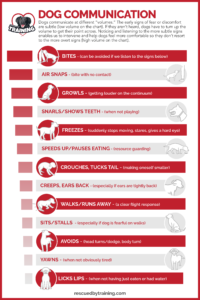 How do dogs communicate when they’re afraid or upset?  They can only tell us through their body language.  They use their body posture and other forms of dog communication – things like the position of their ears, eyes, tail and muzzle, how their weight is shifted, whether they choose to stay, avoid or freeze and growling, snarling, lip curling or, yes, biting.

Dogs very rarely “bite out of nowhere.” More commonly, early warning signs have been ignored, or in some cases, punished.  When this happens the dog escalates their communication to be heard. If we punish the dog for growling, we take growling out of his communication toolkit and force him to bite as his only way to tell us he’s upset.  If you need some help on understanding dog body language, you can download my free infographic seen here.

Dogs that have been scolded, yelled at, hit, put in their crate, etc. for growling or otherwise communicating may have learned to not give those warning signs anymore, but now we have a dog who is uncomfortable but isn’t telling us. This is why never punishing the growl is so important.

I think we also have to look at our definition of the word “unprovoked.” I think many people think the dog bit unprovoked because nobody was actively hurting it – nobody was beating it, nobody was yelling at it, nobody was doing anything the HUMAN thought was causing stress in the dog.

We may not understand why the dog bit, but that doesn’t mean it was unprovoked.

The dog had a reason for biting – we just missed the memo. But, as I’ve said before in previous posts, the dog decides what is safe and unsafe – not the human. So if the dog thinks you’re standing too close to his food or that the child running towards him is too scary, that’s provocation as far as the dog is concerned and a reason to bite. These are not unprovoked bites. We just maybe didn’t understand those situations scared the dog.

What are some possible situations where the dog might be fearful and we may not think those scenarios are scary?

But hopefully you get my point. Many things that we think are normal and can rationalize or justify, dogs very well may find threatening or uncomfortable and that makes them afraid. And fearful dogs turn into aggressive dogs if warning signs aren’t listened to. If we pay attention to the dog giving a hard eye and back away, then the dog won’t need to escalate its communication to a growl or a bite. But if we miss that hard eye, or don’t hear the growl, then we think the dog bit out of nowhere, when really he was giving us clear signs all along. It’s important to remember that behavior suppression is not the same as behavior modification. We have to help the dog be less afraid – not just try to stop them from communicating.

In very rare situations there may be an underlying medical issue, like a brain tumor that causes erratic behavior, but this still doesn’t mean the dog bites unprovoked. The underlying reason is a medical one. But these cases are very rare, and when you hear hoofbeats, think horses, not zebras.

If you need help with your fearful or anxious dog, schedule your one on one session here!  And be sure to sign up for my free weekly newsletter so you don’t miss out on free tips, videos, personal stories, client successes and more!

← Prev: How To Love A Fearful Dog Next: Help! My Dog Suddenly Developed Separation Anxiety → 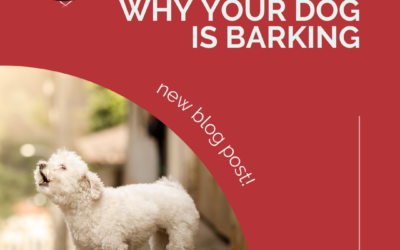 4 Reasons Why Your Dog Is Barking

Did you know that barking is completely normal dog behavior? While it may be annoying, especially if you're... 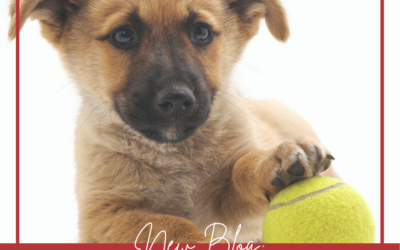 You’re expecting a baby or your baby is starting to crawl or toddle. This is an exciting time but if you have a dog...

Occasionally in my behavior practice, I get clients who come to me saying their dog "suddenly" developed...